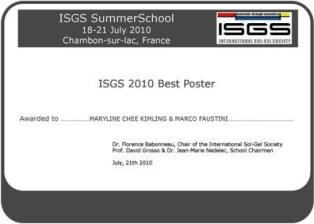 Marco Faustini is a PhD student working in David Grosso’s team since 2008 at the Laboratoire Chimie de la Matière Condensée in Paris.

His PhD’s aim is the production of nanostructured magnetic surfaces, in order to achieve high density data storage devices (up to 1Tbit/inch2) by a bottom-up approach. His work is focused on the preparation of sol-gel derived ultrathin patterned oxide films by self-assembly of block-copolymers and highly controlled chemical solution deposition. The oxide ultrathin membranes (ZrO2, TiO2, SiO2) have been used as pattern to obtain percolated perpendicular media based on hard magnetic alloys as Co/Pt and Fe/Pt. In addition, he has been working on the combination between self-assembled sol-gel derived thin films and top-down techniques like DXRL and NIL.

Her research area is centered around the synthesis of hierarchically porous millimeter-sized metal oxide beads (primarily TiO2/ZrO2) which could be used as adsorbents for radionuclide sequestration. A combined sol-gel chemistry templating technique is employed. This involves the use of structured polymeric template beads that are used as scaffolds to impart similar morphological properties in the metal oxide beads. Variability and control over morphology and porosity can be achieved in the final material through careful choice of polymeric template, allowing the fabrication of a range of metal oxide beads with various morphological and surface properties. Fabricating metal oxide beads with a bimodal pore size distribution is essential for adsorption/separation processes as this allows both rapid transport of fluids (through the presence of macropores, > 50 nm) and the generation of materials with high surface areas (through the presence of mesopores, 2-50 nm) thereby improving the adsorption capabilities of the materials. TiO2/ZrO2 is used as a platform as it has proved to have high radiolytic, hydrolytic and thermal stability which is required in nuclear waste reprocessing. This mix can also be used to encase radionuclides following adsorption by conversion to a dense ceramic which can then be safely disposed of accordingly.

In addition, the fabricated titania-based beads (TiO2/ZrO2 or TiO2/ZrO2-carbon composites) are currently being tested in CO2 sequestration, photocatalysis and drug delivery applications.

They are highlighted in our sol-gel community here.