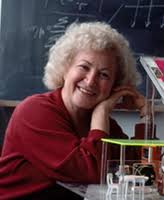 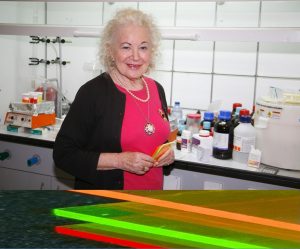 In October 2020, the ISGS will announce details of the “Renata Reisfeld Fellowship” for women working towards their PhD degree in sol-gel science and technology. In addition to celebrating the talents and achievements of an emerging female scholar within our community, the scholarship will also celebrate the personal and professional achievements of a remarkable scientist who has made a tremendous contribution to sol-gel science and technol-ogy through her work over 45 years at the Hebrew University of Jerusalem in Israel (HUJI).

Born in Poland in 1930, Professor Reisfeld emigrated to Israel in 1950 after her family fled Nazi-occupied Poland via Siberia. She credits her early interest in science to the example set by another extraordinary woman, Marie Curie, which led to her competing for one of 23 places available at the Hebrew University in Jerusalem for stud-ying chemistry. She became the Head of the science research team at HUJI in 1975, and began exploring her lifelong interests in luminescent solar concentrators, lu-minescent species, anti-reflecting coatings and sol-gel glasses. The work of her team in the development of lu-minescent solar concentrators is now being commercial-ised by an Israel-based company, GreenSun Energy Ltd, for whom she served as Chief Scientist from 2007 until 2010.

Prior to her recent retirement, she had published over 500 papers (SCOPUS H-Index of 56) with co-authors from over 20 countries, 7 patents and several books. The January 2018 issue of the Journal of Luminescence featured 20 articles written by her international col-leagues to honour her contributions over 45 years to the development and applications of luminescent glasses. She was also chosen for inclusion in Elsevier Physics’ 2018 Virtual Special Issue on Women in Physics, which celebrated the achievements of outstanding women in physics (click here). 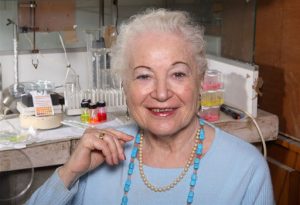 As inspirational and impactful as her scientific career has been, her personal life has been equally interesting and has reflected the drive and determination that has so positively shaped her professional life. As a scientist, her work has taken her all around the world, after travelling from Poland to Siberia as a child where she lived during World War II. In 1976, she accepted an invitation to speak at her first significant luminescent-materials confer-ence in Paris. However, during a stopover in Athens on her journey from Tel Aviv to Paris, her flight was hijacked by commandos demanding the release of prisoners held in Israel and other countries on terrorism charges. She was among the 100 passengers and crew members held captive for a week in Entebbe, Uganda. Never one to miss an opportunity, she asked the Ugandan dictator, Idi Amin, who visited the hijacked passengers every day before their rescue, if he would arrange a tour of Uganda – a request to which he apparently agreed.

Not many of us can claim to have had a poem describing our life and work published in a scientific journal. Professor Reisfeld is one such person. In the Special Issue of the Journal of Luminescence dedicated to her career, a colleague, Giuseppe Baldacchini, wrote a poem entitled “Renata Sunshine” which captures the personal and professional ethos that has guided her life and her work. This is undoubtedly a good point at which to conclude a short summary of the remarkable career of Professor Renata Reisfeld.

For more information about the life and work of Professor Renata Reisfeld, see: