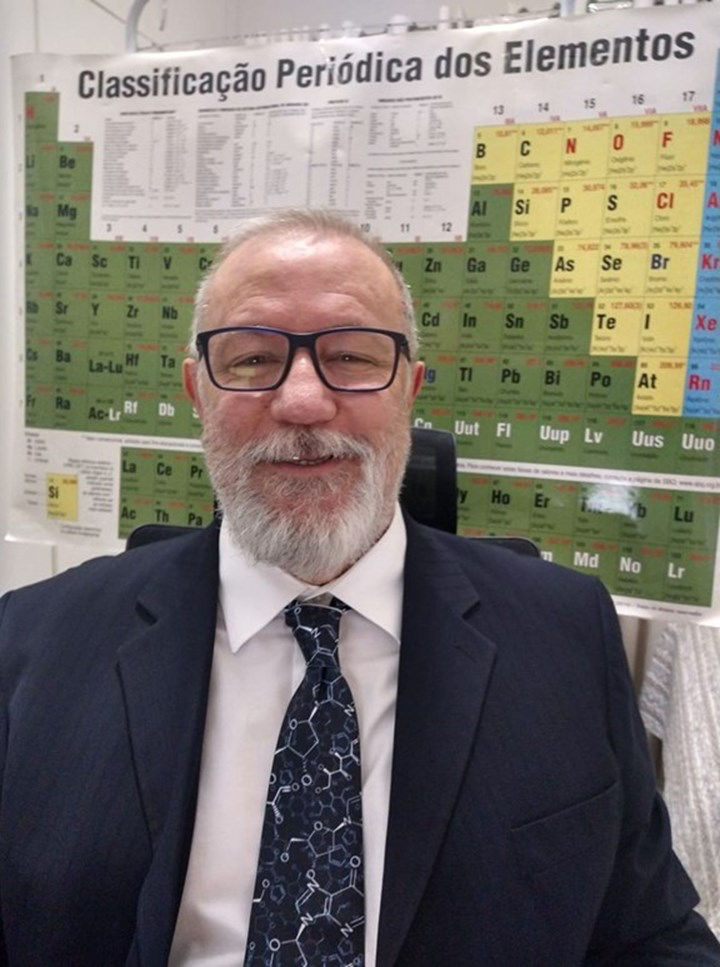 When asked in 2016 what message he would leave for people who are just beginning their careers in science, this month’s Colleague-in-the-spotlight responded by saying:

“We are all born liking science. Who, as a child, in a moment of scientific inspiration, didn’t mix our mother’s perfume with insecticide and some olive oil just to “see what came out of it”? This taste for science has to be preserved in our educational system. And for those who are starting out I say: go ahead. The country needs you. Someone said that when you do what you love you will never “have to work”. Work becomes your pastime and it’s really awesome”.

This compelling sense of scientific wonder at the world around him has driven much of the professional career of Professor Sidney Ribeiro, whose achievements we feature in this edition of the ISGS Newsletter.

Sidney was born in São Paulo in 1959. His love of chemistry was inspired by a technical course in chemistry at his high school in Santos. He subsequently completed his Bachelor and Master degrees in 1982 and 1987, respectively, at the São Paulo State University- UNESP in Araraquara, while teaching in UNESP’s Chemistry Institute from 1986. During his doctoral research, which he completed at UNESP in 1992, he began to explore the world at the interface between Chemistry, Physics and Materials Science, which still inspires his scientific creativity today.

Following his Postdoctoral Fellowships in France at the École Centrale Paris (1994) and at the Centre National d’Etudes des Telecommunications (CNET, 1995), he returned to UNESP and from 2001 to 2003 was the head of the General and Inorganic Chemistry Department. In 2008, he became a Full Professor of Inorganic Chemistry within UNESP’s Institute of Chemistry. His current role is Director of the Institute for the period from 2020 to 2024.

Sidney published his first sol-gel paper in 1992, combining his background in the electronic spectroscopy of lanthanides and the sol-gel processing of cassiterite SnO2 , with Eu 3+ ions substituted on Sn 4+ sites. This work described one of the few examples of the photoluminescence spectra of Eu3+ located on perfect centrosymmetric sites, where all electric dipole transitions are strictly forbidden. This “textbook” example has since been used in spectroscopy courses by colleagues all over the world. His subsequent research activities have included glasses and glass ceramics; organicinorganic nanohybrids; optical materials such as planar waveguides, integrated optics and materials for up-conversion; colour-tunable materials; materials for nanothermometry; and materials for water decontamination. His on-going research projects are focussed on natural polymers (bacterial cellulose and silk fibroin); organic-inorganic hybrids; waveguides (optical fibers and thin films); porous materials; and luminescent markers for applications in medicine. This rich portfolio, which has been developed in collaboration with his 32 MSc students, 25 PhD students and 27 post-doctoral fellows, together with colleagues from over 20 countries, has led to a total of nearly 500 publications that have been cited over 11,600 times (SCOPUS), in addition to over 15 patents.

In 2009, Sidney, together with Professor Luis Carlos from Aveiro (Portugal), organised and hosted the XV th International Sol-Gel Conference” in Porto de Galinhas on the Eastern Coast of Brazil. Each of the biennial International Sol-Gel conferences is as much a celebration of the unique culture of the host city and country as it is a celebration of a shared love of sol-gel science and technology, and the spectacular scenery of Porto de Galinhas combined with the compelling “love of life” of the Brazilian hosts combined to make the meeting a memorable experience.

It is often said that Brazilians will find a way to express their passion for life in everything that they do – be it through music, dance and/or food. To this list, Sidney adds a love of science, and a capacity to communicate this passion in almost everything that he does. Now if we could only persuade him to tell us where he purchases his ties!