Sol-Gel Science and Technology – The Microstructure of our Community 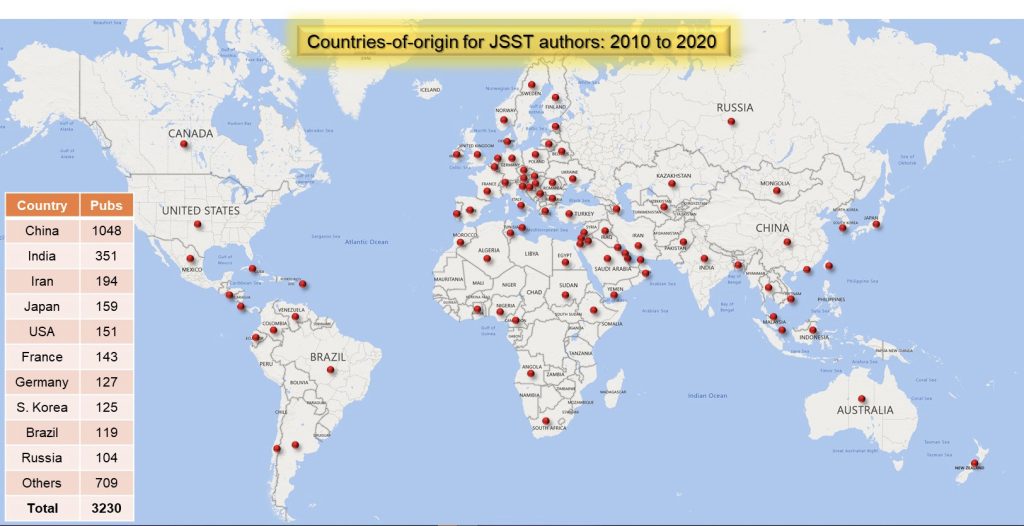 Those who were fortunate enough to attend the XX International Sol-Gel Conference in 2019 were privileged to experience the rich cultural, scientific and technological diversity of a community celebrating a shared interest in the many facets that shape sol-gel science and technology. Framed against the spectacular cultural and archi-tectural backdrop afforded by the city of St Petersburg, over 550 participants from 56 countries were treated to presentations by 60 speakers drawn from 24 countries. A particularly important aspect of the meeting was the focus on students – the future of our community – and the opportunity for more established practitioners to pro-vide our younger colleagues with the necessary foundations upon which to continue defining and implementing their career aspirations. We’ll celebrate once more as a community at Solgel2021 in just over 12 months, this time in the historical city of Lyon.

The snapshot provided by participants at the International Sol-Gel Conferences about the size and shape of our community begs a bigger question – just how large and diverse is the community of sol-gel science and technology practitioners, what have we achieved, and in which directions are we moving as a community? In this context, what do we even mean by “community”? This article explores these questions by focussing on our “scientific”

A search of the papers published in JSST from 2010 to 1 June 2020 using standard bibliometric tools such as SCOPUS highlights the striking diversity of our community. In all, more than 8700 authors from 88 countries have published over 3200 papers in JSST during this period. As indicated in the Table below, nearly half of these involve work from Chinese, Indian and Iranian colleagues. The extent of collaboration underpinning this work is also quite remarkable. For example, of the 193 papers published in JSST in 2020 (to 1 June), more than 130 involved co-authors from two or more Institutions. Extending this analysis reveals that French colleagues are among the most likely to collaborate with international co-authors, with 82 of their 143 papers over the past decade featuring co-authors from 39 different countries. German colleagues are also highly collaborative, with 35 different countries having published in collaborations with German co-authors in JSST since 2010. Many of our community’s smaller contributors are also highly collaborative. For example, although Australian (35 papers) and Saudi Arabian colleagues (60 papers) have relatively small volumes of work published in JSST since 2010, over 80 % of those papers involve international collaborations in both cases. 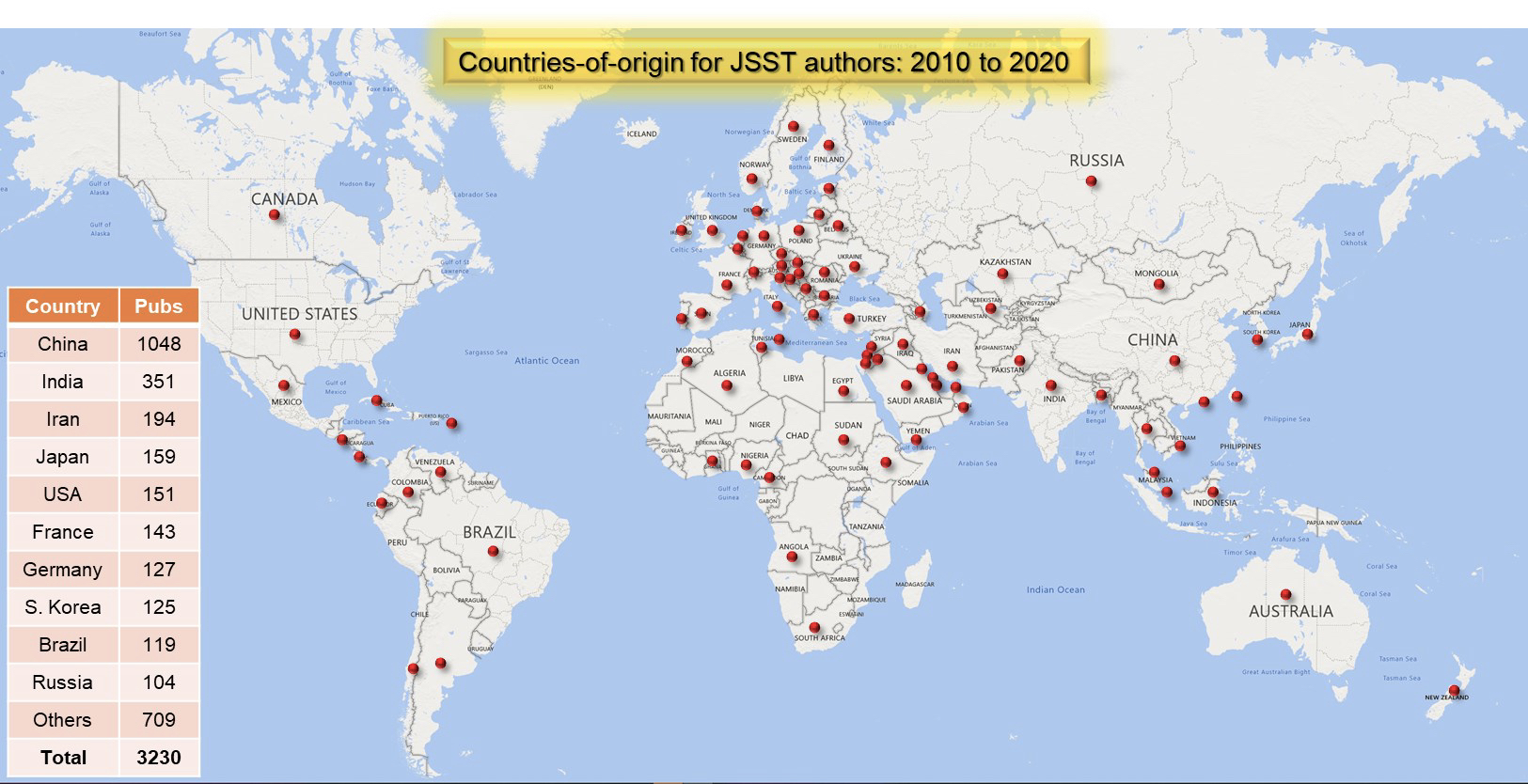 The rich diversity of our community is matched by the diversity of fields in which sol-gel science is impacting. Not surprisingly, given the relative maturity of sol-gel sci-ence, the majority of publications now appearing in JSST address applications of sol-gel science rather than fundamental aspects such as precursor chemis-try. Publications in JSST to date during 2020 have been dominated by work in areas such as photocatalysis, coatings and films for a variety of applications, biomedical applications, energy 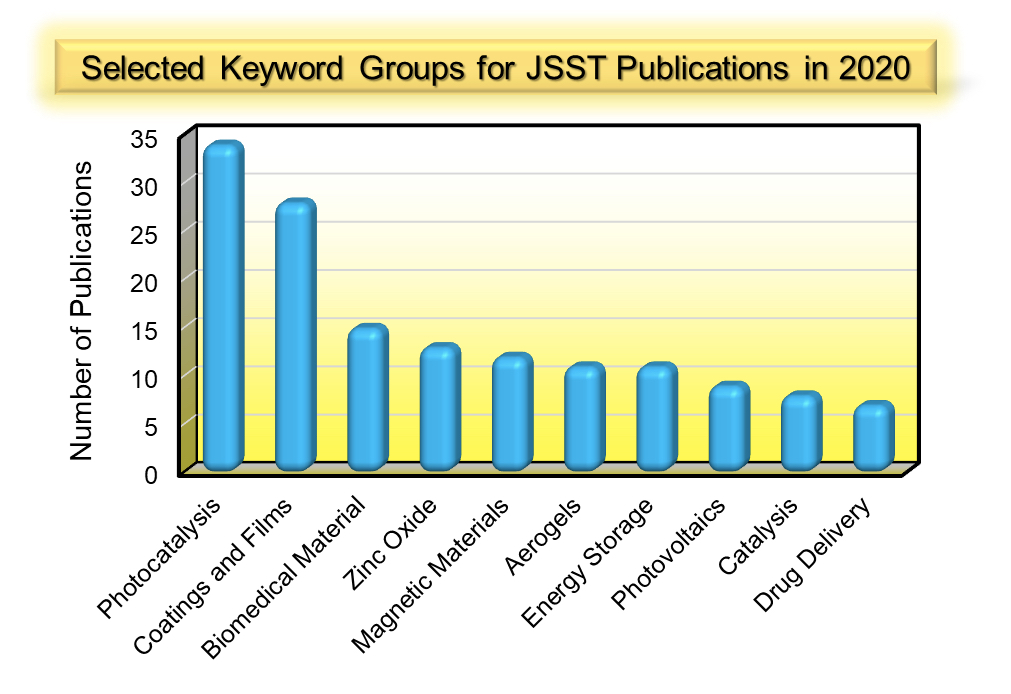 generation and storage, catalysis, etc. A review of publications appearing in 2017 and 2018 in JSST revealed similar application areas, although their relative importance is evolving with time. For example, the number of papers involving aerogels was compara-ble to that of photocatalysts in 2017/18, whereas the number of aerogel studies in 2020 has decreased significantly compared to studies in photocatalysis. 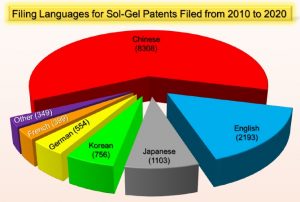 The intellectual-property arena presents a complementary window onto the activities and achievements of the sol-gel community, albeit one that provides a different perspective on the centres of greatest activity in our diverse community. Overall, in excess of 30000 (co-)inventors have contributed to the sol-gel patent literature during the decade from 2010-2020, with over 370 of these being named on 10 or more patents. These inventors are drawn from organisations spread across 56 countries, with filings having been made in over 20 languages. A significant majority of these (over 60 %) were filed in Chinese, with the other main languages being English, Japanese, Korean, German and French. 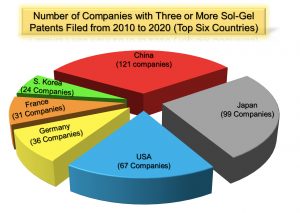 Not surprisingly, the organisations from which (co-)inventors originate are similarly diverse. Nearly 3000 organisations are named on sol-gel patents published in the past decade, with a surprising number of these being Universities or National Laboratories. Indeed, of the organisations with the most filings, six Chinese Universities are in the top 10 (with Shaanxi University of Science and Technology, Tianjin University and Zhejiang University being the top three, each with over 130 filings). French National Laboratories (CNRS and CEA) also appear in the top 10 filing organisations, with 134 and 99 filings, respectively). Focussing on companies that are named on sol-gel patents reveals over 960 companies with three or more filings over the past decade. Chinese, Japanese and USA companies dominate, with German, French and South Korean companies also having a significant IP presence in sol-gel technology. Companies with a significant number of filings (25 or more) are summarised below. 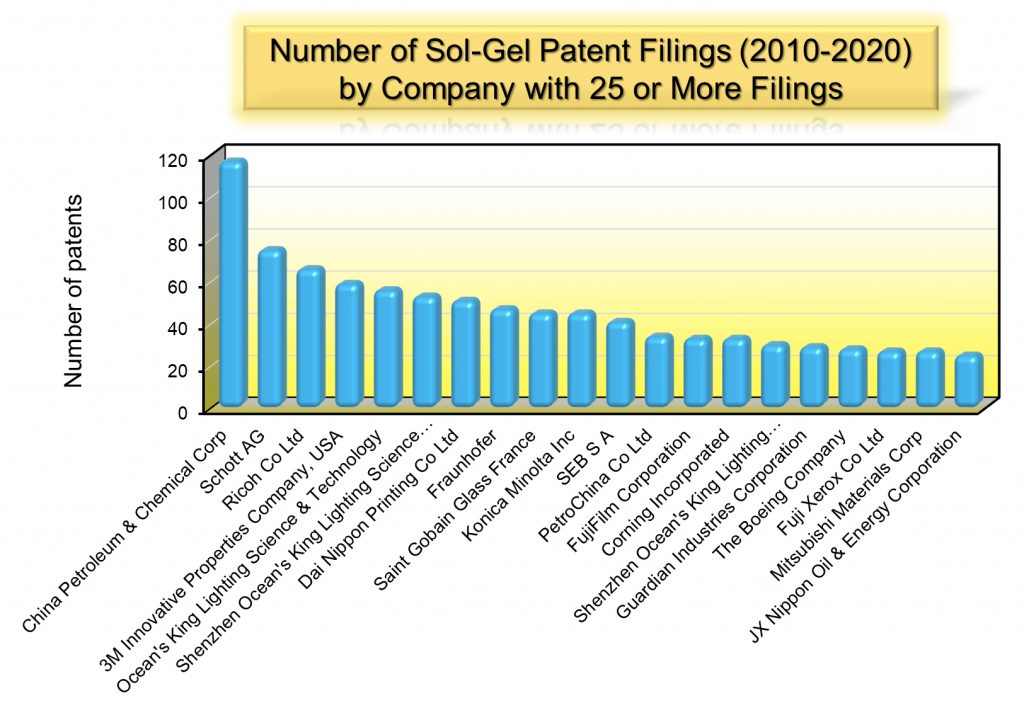 Yet another indicator of the rich versatility of sol-gel science and technology is the domains in which our community has established an IP presence. Although any such analysis is somewhat subjective, the sol-gel IP space appears to be dominated by applications for films and coatings, with batteries, catalysis and photocatalysis also having a significant presence. This perspective is somewhat different to that obtained from the corresponding (JSST) academic literature, where photocatalysis and films/coatings both dominate in 2020. Naturally, there will always be a lag between the conversion of applied science into IP and/or products, and the baseline comparison set out in this article will be updated on an annual basis to track that process. A similar analysis will be applied in next month’s newsletter to focus on the conversion of sol-gel IP into sol-gel-based products. 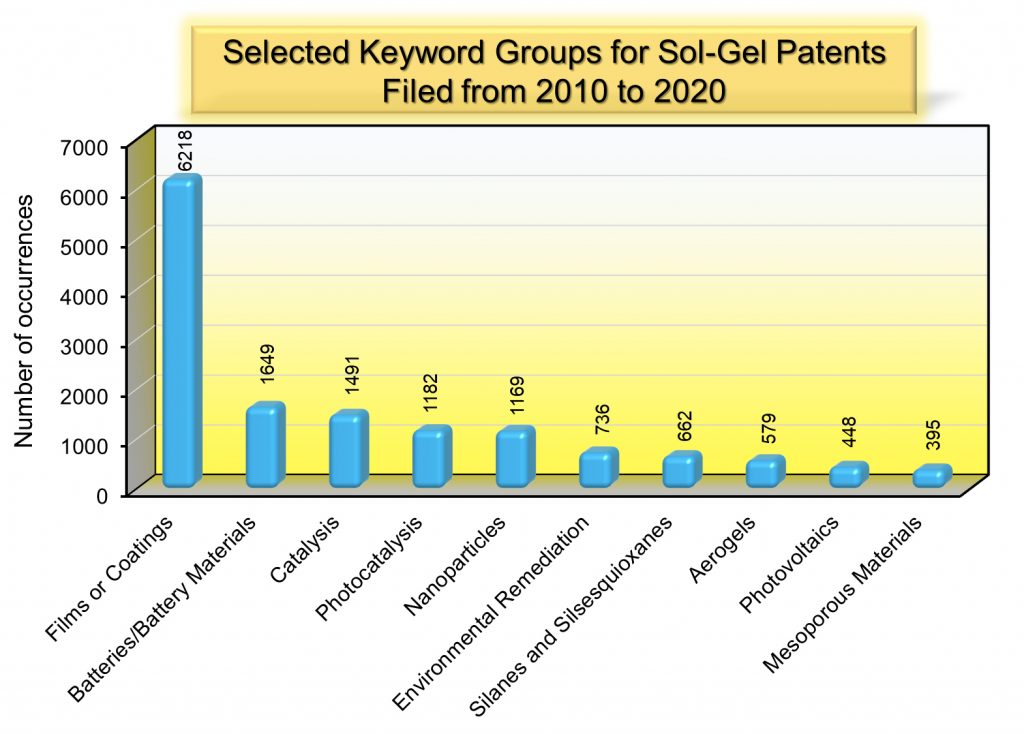 Finally, it is interesting to compare areas of cross-over between the academic and patent literature. Somewhat surprisingly, the number of authors who have been ac-tive in both areas during the past decade is limited, which suggests one possible area in which the sol-gel community could focus attention, either at the biennial International sol-gel conferences or through our Sum-mer Schools. This topic will be discussed in greater detail in the July Newsletter.