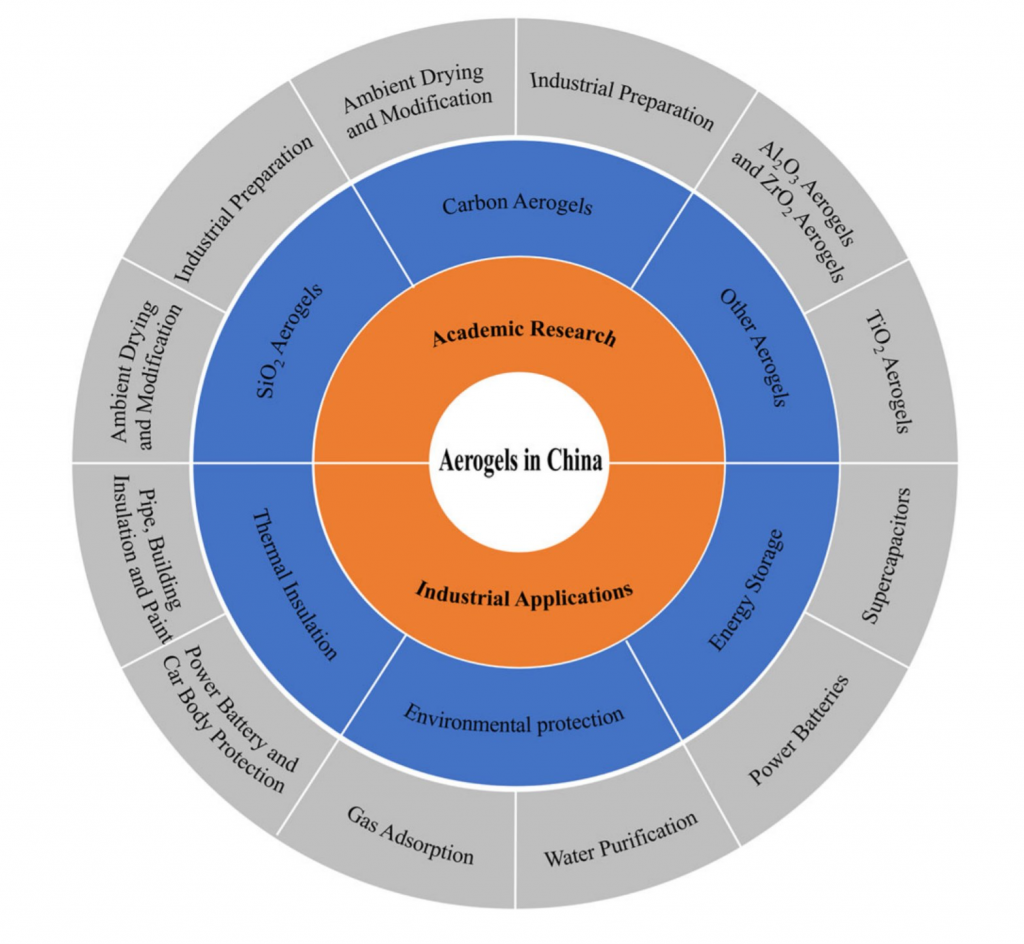 As members of the ISGS are well aware, practitioners of sol-gel science and technology are part of a diverse community which moulds the chemical, physical, biological and materials sciences into a unique multi-, inter- and trans-disciplinary tapestry, with a focus that covers basic and applied science, together with their translation into products. Although relatively young compared to other materials-related domains such as the glass community, we are now reaching a level of maturation that would lead us to expect that the conversion of basic sol-gel science into intellectual property and “know how” would be leading to products that are changing our lives. One example of this is the commercialisation of aerogel technology in China, where aerogel production now accounts for over 62% of the world’s output. A recent comprehensive review by Shen and Zhang (from which the Figure to the left was taken), as part of JSST’s Topical Collections series, reviewed the scope of this work which has involved the conversion of academic research into products with applications in such diverse fields as thermal insulation, environmental remediation and energy storage.

The development pipeline for the conversion of such basic science into products can be long and tortuous. In addition to the timelines outlined in Shen and Zhang’s review, it is interesting to focus on one particular (non-materials-related) triumph of science that has impacted on all of our lives over the past two years; namely the apparently rapid development of the COVID-19 vaccines that have helped in the fight against the pandemic. Our political leaders often point to the apparent speed with which the vaccines were developed and deployed. However, they were actually developed on the basis of research that commenced around 30 years ago, rather than just miraculously appearing. Given the 30-year odyssey for this particular triumph of basic science, and the fact that the Journal of Sol-Gel Science and Technology is now approaching its 30 th Anniversary (which will be celebrated in 2023), it is interesting to explore the extent to which scientific papers which have appeared in journals such as JSST have been cited in the patent literature and contributed explicitly to the development of IP. 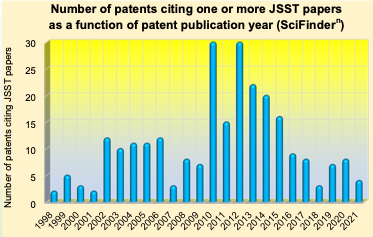 According to SciFindern , 6276 papers have appeared in JSST from the first issue in 1993 until the November 2021 issue of the journal. During the past three decades, these papers have been collectively cited by over 62,450 works. Of these citing works, 258 were patents published from 1998 onwards (0.41 % of citing works, with over 180 unique JSST papers cited). As shown in the Figure, there was a notable jump in the number of patents citing JSST publications from 2010 to 2012, with 75 patents citing JSST papers during this period. This period of more intense activity has been followed by a period of decline, with a steady decrease to values comparable to those observed from 2002 to 2009.

Although a detailed analysis of this trend is beyond the scope of this short article, a number of possible factors contributing to the decline following 2012 are evident. For example, the Japanese company Semiconductor Energy Laboratory Co., Ltd. was the assignee for 54 patents citing JSST publications from 2009 to 2015, with 36 of these appearing from 2010 to 2012 (with one in 2009 and 17 in 2013-2015). This accounts for nearly half of the total patents appearing from 2010 to 2012, with no other Assignee having more than four patents citing JSST publications. Assignees whose patent cited four JSST papers from 1993 to 2012 include 3M (USA), Cree Inc (USA; now known as Wolfspeed Inc), L’Oréal (France) and Transgenomic Inc (USA; now known as Precipio). 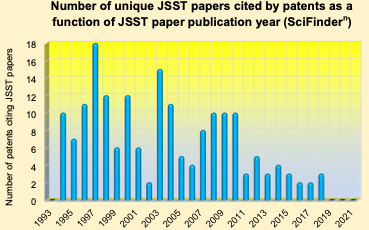 To place these outcomes in perspective and formulate a benchmark for comparison, it is interesting to compare the contribution of JSST papers to the patent literature with that of papers appearing in other materials-related journals. For example, SciFinder lists over 29,000 papers in the Journal of the American Ceramic Society over the lifetime of this journal from 1918-2021. Of the >303,000 works that have cited these papers, 844 were patents (0.28 %). A similar analysis for the Journal of Non-Crystalline Solids, Ceramics International and Chemistry of Materials reveals that patent citations represent 0.34, 0.12 and 0.33 %, respectively, of the works citing these papers.

Finally, given the challenges associated with exploring citations in the diverse patent literature, it is of interest to compare the quantitative and qualitative results presented above with those obtained using alternative data sources, which presumably use different methodologies to populate their databases. For example, Altmetric lists 1068 cites of JSST papers by patents from 1996 to 2021, which is 1.0 and 1.1 % of the total cites of JSST papers included in the SCOPUS and Dimensions databases, respectively (note that the Dimensions database is the source of patent statistics reported by Altmetric). As indicated in the Table below, the corresponding Patent:Paper cites for the Journal of Non-Crystalline Solids, Journal of the American Ceramic Society and Ceramics International are 1.5, 1.0 and 0.4 %, respectively (SCOPUS; the corresponding values obtained from Dimensions are 1.6, 1.0 and 0.4 %, respectively). 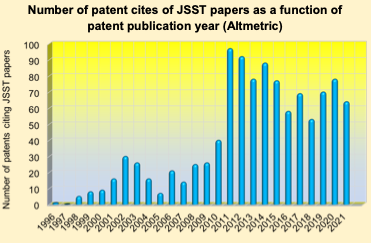 Comparisons such as this suggest that, compared to other materials-related journals, JSST is contributing positively to the translation of basic and applied science into the IP pipeline that will presumably lead to new products of benefit to society. This is a promising outcome for a relatively young journal that emphasises both science and technology as part of its vision and it will be interesting to follow this “work in progress” over the next 30 years of the evolution of JSST.