Who is doing Sol-Gel? A Snapshot

As modern scientists our life is full of meetings, conference, papers and experiments and we usually take little time to reflect on who is really working in our field not on an individual basis but more on the big picture side of things.

So, like everyone, when I was “volunteered” to write something about the sol-gel world the first question that came through my foggy brain was: “Who is doing sol-gel?”“How stupid is that question” was my next thought! A lot of people, most of my friends from all over the world is the obvious answer! Well after a bit more thinking, catalysed by caffeine, I just realised that, this was in fact, a very difficult question to answer “scientifically”. The problem is where to find reliable data. Following the old saying that “1 day in the library is worth 10 days in the lab”, I decided to gather my data through publications using the 21st technology magic wand i.e. the computer search engine. My strategy was to look at the number of publication (papers and patent), their origins and where they were being published in order to try to sketch a composite picture of the modern sol-gel scientist.

Figure 1: Evolution of publication and patent in the sol-gel field 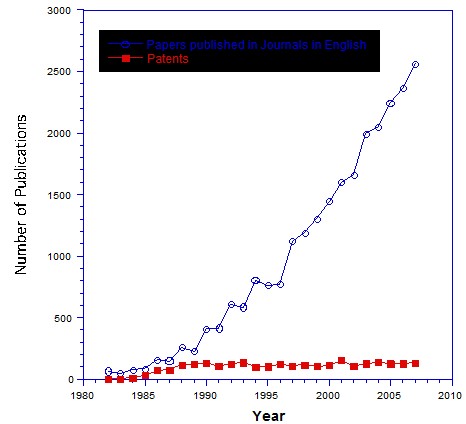 The first step was to look at the number of publication in the sol-gel field. I decided to select the papers publish in English and in Journal only. This is not a sign of lack of cultural tolerance, but everyone knows that if it is interesting science it will get published in a Journal in English. Figure 1 shows clearly a very nice progression in the last twenty years of the number of publications in the sol-gel field demonstrating a growing interest for sol-gel technology in academia. This is even more impressive since a lot of sol-gel technologies are being used in related field such as composites, mesoporous solids and nanotechnology without being labelled as “sol-gel”. In contrast, the number of patent has remained roughly constant since 1990 with an average number of patents around 120/year. One has to this with a grain of salt, as the art of patents drafting consists in hiding all the relevant information about the technology in a sea of legal language so that people skill in the art i.e. other scientist cannot find it…Nevertheless, with a lip of faith, one could conclude that although there is an ever increasing interest towards sol-gel technology in the academic world the uptake by industry of sol-gel technology remain relatively low.

Figure 2: Patent repartition by language since 1939 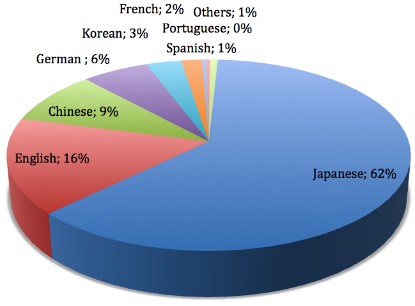 Now the immediate question that springs to mind is who is patenting? where? The interesting thing with patent is that people usually write patents in their language of origin and then file the corresponding PCT worldwide and get them translated in various other languages. Although the language repartition does not give you a breakdown by country, it is nevertheless informative. Figure 2 clearly shows that the majority of the patents (62%) on sol-gel have been filed in Japan, followed by English which groups the USA and most commonwealth countries, followed by China, Germany (Austria and Switzerland), Korea, France. The majority of the patent in Japan have been taken by large industrial corporations and thus attest of the good percolation of sol-gel science in the Japanese industry. By comparing Figure 2 to Figure 3, one can see the interesting strong push from China in patenting sol-gel related technologies. Although as for Japan, the high numbers might also be reflecting the relative lower requirement for filing patent in Asian countries, this push corresponds to a general trend in the whole manufacturing sector.

Figure 3: Patent repartition by language during the last 5 years 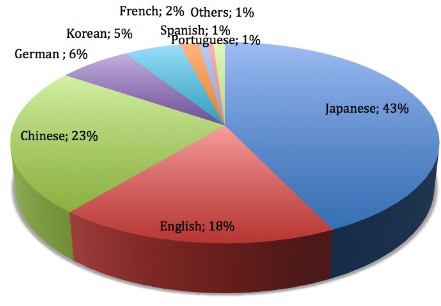 Interestingly this increasing interest for sol-gel technologies in the People Republic of China is reflected in the academic world. Out of the 12 top publishing institutions, 10 are Chinese institutions with only one Japanese institution (Kyoto University) and the Russian Academy of science. Once again this reflect general trends in science and industry, which confirms the development and greater participation of China in world science.

Table 1: Top 12 institution for sol-gel publications in the last 5 years

Finally, one of the key questions for academics is where does sol-gel science gets published. The answer is summarised in Table 2. It is very heartening to note that the first Journal in terms of number on publications on sol-gel is the official journal of the International Sol-Gel Society, the Journal of Sol-Gel Science and Technology. It is a noteworthy achievement, with twice the number of publications of its closest competitor, and this especially in the current aggressive context where the number of specialist journals is increasing exponentially. Of course, one could argue that this high number is partially due to the publishing of the proceeding of the International workshop, but never the less it shows that the JSST fulfil well its duty as the preferred vehicle for communicating scientific results in the sol-gel community. The top-scorer represent a good cross-section of material chemistry and materials science journals confirming the good hybridization of the sol-gel community with the general materials (and especially with the ceramicists) and chemical communities. This is fully logical since sol-gel technology is really at the intersection of these disciplines.

Table 2: Top 12 journal for sol-gel publications in the last 5 years

So to conclude lets come back to the composite picture of our fellow sol-gel scientist. Well, I would say that there is a high probability that he/she is an academic from China, and that he/she publishes in the JSST and because he/she is quite clever he is investing on the Shanghais stock exchange… If this is not the case, our composite scientist is most probably Japanese and working in a big company and doing wonderful thing with sol-gel science like antifogging rear view mirrors, self cleaning window, novel coating for flat panel displays that will be sold to his American or European colleague that would think “gee that’s clever why didn’t we think about it before”. The hope for the future is that our statistical sol-gel scientist will be coming for emerging economies such as India, South America or even Africa, making our community a truly global one.