A team led by a Brown University chemist has created the smallest iron oxide nanoparticles to date for cancer detection by magnetic resonance imaging (MRI). The magnetic nanoparticles operate like tiny guided missiles, seeking and attaching themselves to alignant tumor cells. Once they bind, the particles emit stronger signals that MRI scans can detect.

PROVIDENCE, R.I. [Brown University] — Magnetic resonance imaging (MRI) can be a doctor’s best friend for detecting a tumor in the body without resorting to surgery. MRI scans use pulses of magnetic waves and gauge the return signals to identify different types of tissue in the body, distinguishing bone from muscle, fluids from solids, and so on. 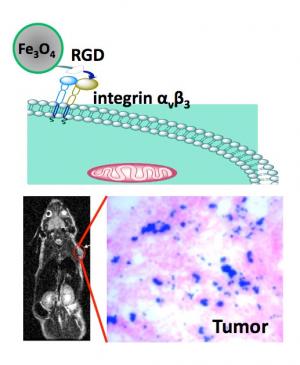 Now, Brown University chemist Shouheng Sun and a team of researchers have created the smallest magnetic nanoparticles to date that can be employed on such seek-and-find missions. With a thinner coating, the particles also emit a stronger signal for the MRI to detect.

The results have been published online this week in the Journal of the American Chemical Society. Brown graduates students Jin Xie, Chenjie Xu and Sheng Peng collaborated on the research, along with Professor Xiaoyuan Chen and his associates from Stanford University.

The team created peptide-coated iron oxide nanoparticles — particles billionths of a meter in size. The researchers injected the particles into mice and tested their ability to locate a brain tumor cell called U87MG. Sun and his collaborators concentrated specifically on the nanoparticle’s size and the thickness of the peptide coating, which ensures the nanoparticle attaches to the tumor cell.

Size is important because the trick is to create a nanoparticle that is small enough to navigate through the bloodstream and reach the diseased area. Bigger particles tend to stack up, creating the circulatory system’s version of a traffic jam. Sun’s team developed a nanoparticle that is about 8.4 nanometers in overall diameter — some six times smaller than the size of particles currently used in medicine.

“We wanted to make (the nanoparticle) very small, so the body’s immune system won’t recognize it,” Sun explained. “That way, you let more particles interact with and attach to the tumor cell”.

Nanoparticles are important in MRI detection because they enhance what scientists refer to as the “contrast” between the background, such as water molecules in the body, and a solid mass, such as a tumor.

The coating, while integral to the nanoparticles’ attachment to the tumor cell, also is crucial to establishing the “signal-to-noise” ratio that a MRI uses. The thinner the coating, the stronger the emitted signal and vice versa. Sun’s team outfitted their nanoparticles with a two-nanometer thick peptide coating — 10 times thinner than the coating available in popular MRI contrast agents such as Feridex. Sun’s nanoparticles are like having a 50,000-watt radio transmitter versus a 150-watt station; it’s easier for the MRI to “hear” the stronger signal and to hone in on the signal’s source.

Another important feature of the team’s work is discovering that the RGD peptide coating binds almost seamlessly to the U87MG tumor cell. The team plans to test the particle’s ability to bind with other tumor cells in further animal experiments.

The National Cancer Institute, part of the National Institutes of Health, and the Department of Energy’s Experimental Program to Stimulate Competitive Research (EPSCoR) funded the research.