MENAPiC: a new actor in the field of thin film characterization

Created in 2010 on the basis of a laser technology developed since 2000, MENAPiC’s mission is to support innovation by providing mechanical characterization of thin films, stacks and/or interfaces.

MENAPiC is a french SME located in Lille (France). MENAPiC is active in the field of mechanical characterization of thin films (nm to µm), a scale at which standard metrological tools are facing limitations. Created in 2010 on the basis of a laser technology developed since 2000, MENAPiC’s mission is to support innovation by providing mechanical characterization of thin films, stacks and/or interfaces. 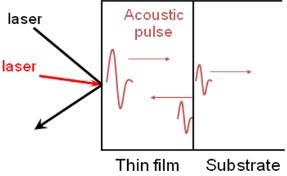 MENAPiC uses a laser to implement a SONAR at nanoscale from which elastic/mechanical properties of thin layer can be measured. Neither contact nor destruction of the sample is required for such a characterization.

Any material is welcome.

Such characterizations can be performed on various materials as different as metals, dielectrics or semiconductors. The studied material can be crystalline, poly-crystalline, amorphous or porous. The thickness range is from a few nanometers to a few microns. The technology operates in the time-domain which means that it is compatible with complex stacks, the successive layers being detected at various time-delays.

The technology, developed since 2000, has been successfully applied to characterize BAW, SAW and MEMS materials. Further application fields are now concerned such as coatings, interfaces or surface treatment.

MENAPiC, a research spin-off from CNRS.

MENAPiC has been launched in March 2010 out of IEMN (http://www.iemn.univ-lille1.fr), a CNRS lab by Dr Patrick EMERY and Dr Arnaud DEVOS in order to offer services of characterization on thin films.

A better physical knowledge to support innovation at the nanoscale”.